Hello and welcome to the first post of the Salt Lake Film Society blog! Whether you’re a long-time patron or a curious movie connoisseur looking for your fill of independent cinema, SLFS is proud to have provided the Salt Lake City community with reliable access to independent film for over two decades now.

The undertaking of our organization is to offer the Utah public consistent access to thought-provoking and socially-engaging films. Furthermore, our mission revolves around the power of film as a universal language, and how these visual stories prompt discussion, inspiration, and introspection in our local community. We are proud to provide physical spaces for film access in Salt Lake City through the Tower Theater and Broadway Centre Cinemas, and with this blog, we also want to create a digital space to further the discourse and dissemination about independent cinema.

We want to foster a more consistent connection with our fellow movie-goers, and showcase the people working behind the scenes at SLFS to create the experiences that you love. Whether you’re reading about the impactful viewing experiences of our members, or learning more about the films that educate and energize our staff, this blog plans to offer a variety of avenues for patrons, donors and staff alike to engage with our mission, and the visual stories that define it.

The Importance of Independent Film

Why independent films though? What about the film medium and the survival of independent theaters is so important to our community here in Salt Lake City?

“Filmmaking is a chance to live many lifetimes”

At SLFS, this quote from Robert Altman presents an ideology that exists at the core of why we do what we do. Movies are an indispensable form of entertainment; we love to be entertained. A thoughtful visual story on a big screen has the capacity to captivate our imagination like nothing else. Film lets us feel what it’s like to walk in someone else’s shoes, if only for a brief moment, and the ability to live these vicarious “lifetimes” through cinema gives our minds the opportunity to break out from the ordinariness of everyday life and dip our toes into the extraordinary.

We love to be entertained, but at the same time, we also like to be challenged, to be compelled to think, analyze, and learn. Film pairs human faces and feelings to the stories and experiences of our world. They are naturally inclusive, turning large, complex concepts into accessible, ubiquitous storylines that we can’t help but relate to. Film helps us open up our minds to an exchange of culture and ideas, especially when someone sees a film about a place or persons dissimilar to their own,

At SLFS, we work hard to curate programming that promotes this cultural and ideological exchange, whether it’s Norwegian romantic dramas (Worst Person in the World), or Macedonian horror stories (You Won’t Be Alone). We strive to play our part in the cultivation of a more compassionate and thoughtful community, and our mission aims to do this one film at a time.

The independent theaters we operate seek to embody this diverse quality of independent film as well, a commitment we have established through our Never Zero pledge; we will never have an absence of programming that represents marginalized voices.

Broadway Centre Cinemas and the Tower Theater, as well as independent theaters around the world, have always made it their mission to exhibit as many of these captivating and trailblazing films as possible, and to get as many people to see them as possible. We don’t play the movies that will fill the most seats or make the most money. We want our Salt Lake City community to see films they’ve never heard of, engage with stories they’ve never experienced, and live a few lifetimes they’ve never even thought about.

So help us support the amplification of diversity and the introspection of your community. Join us for some big-screen entertainment, and leave feeling inspired, at Salt Lake Film Society. You have heard of “independent” films, but what actually classifies a film as one? Learn the differences between studio and independent films here! 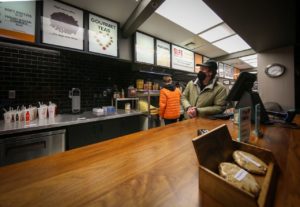 At SLFS, we take a lot of pride in the access to independent film we provide to SLC. But it’s more than just a paycheck to our staff and team.